Most adults have had experiences with emotional eating.

While no single definition exists for emotional eating it can be explained as eating in response to feelings (emotional hunger) rather than the physical need to eat and nourish the body (physical hunger). Emotional eating is often linked to various triggers such as stress, fear, anxiety, tension, boredom, fatigue anger, and loneliness. Although people can say they also eat in response to positive feelings and events, this is generally not categorized as emotional eating.

The concern with eating in response to emotions is that people tend to overeat, consume too many calories and often choose foods that are nutrient-poor. A belief is that some foods may have addictive qualities and cause a release of hormones that promote a feeling of wellbeing and satisfaction. The pleasure of eating replaces some negative feelings so if there is a relationship with food(s) that bring pleasure, they will seek out these foods in an emotional moment. This relationship becomes a habit and the cycle can be challenging to break. 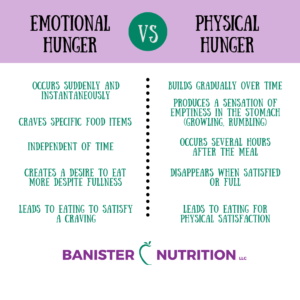 Another thought is that food can be a distraction from negative feelings and emotions. While consuming food that brings satisfaction it’s easier not to think of the triggers that cause them to overeat. The concern with this is that the distraction is short-lived, and people end up in a similar state that brought them to use food to cope. It’s not uncommon for additional negative emotions such as guilt and concerns about health and weight management.

If you struggle with identifying whether your hunger is physical or due to emotional response review the chart below and healthy coping mechanisms when you’re in an emotional moment.

There are many other ways to cope or respond in an emotional moment. Identifying eating emotional triggers is important in identifying why and how extra calories are consumed. Once identified, the next step is to come up with a plan of action to break the cycle and adopt new coping mechanisms.  Some suggestions include:

Want to join the discussion?
Feel free to contribute!

Get the latest posts right in your inbox!

Should I see a Registered Dietitian?
Scroll to top